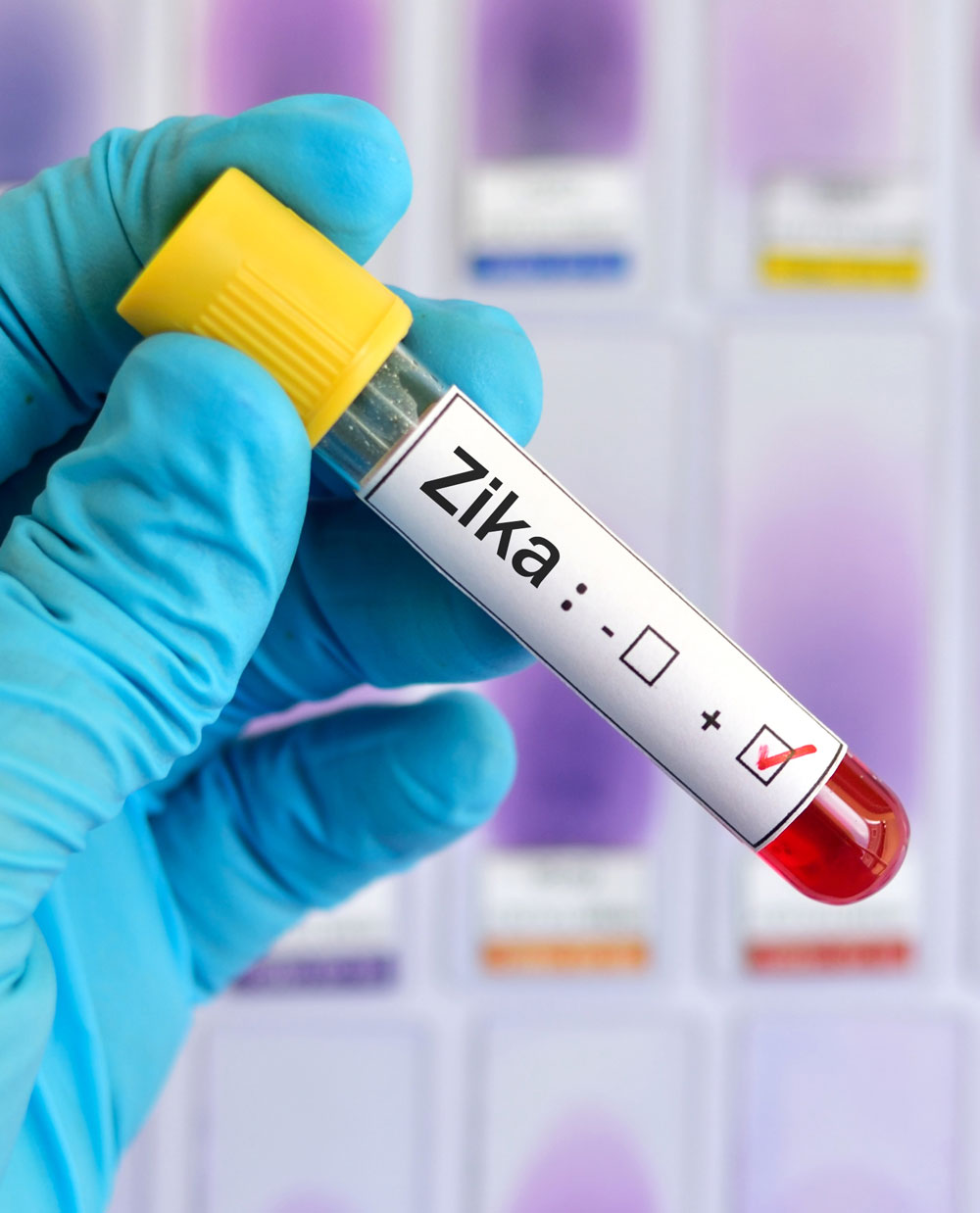 Some mosquitoes are vectors for diseases. This means they can transmit diseases from one human or animal to another. Typically, the diseases are caused by viruses or tiny parasites. For example, a mosquito that bites an infected human or animal can pick up a virus along with the blood meal. The mosquito and virus do not harm one another but the virus reproduces inside the mosquito. Later, the mosquito can pass the viruses to other humans when biting them.

Many mosquitoes are nothing more than annoying pests; but with over 3,000 species worldwide, and 150 in the U.S., some are very dangerous.

Zika virus disease (Zika) is a disease caused by Zika virus that is spread to people primarily through the bite of an infected Aedes species mosquito. The most common symptoms of Zika are fever, rash, joint pain, and conjunctivitis (red eyes). The illness is usually mild with symptoms lasting for several days to a week after being bitten by an infected mosquito. People usually don’t get sick enough to go to the hospital, and they very rarely die of Zika. For this reason, many people might not realize they have been infected. Once a person has been infected, he or she is likely to be protected from future infections.

Zika virus was first discovered in 1947 and is named after the Zika forest in Uganda. In 1952, the first human cases of Zika were detected and since then, outbreaks of Zika have been reported in tropical Africa, Southeast Asia, and the Pacific Islands. Zika outbreaks have probably occurred in many locations. Before 2007, at least 14 cases of Zika had been documented, although other cases were likely to have occurred and were not reported. Because the symptoms of Zika are similar to those of many other diseases, many cases may not have been recognized.

In May 2015, the Pan American Health Organization (PAHO) issued an alert regarding the first confirmed Zika virus infection in Brazil and on Feb 1, 2016, the World Health Organization (WHO) declared Zika virus a public health emergency of international concern (PHEIC). Local transmission has been reported in many other countries and territories. Zika virus likely will continue to spread to new areas.

West Nile virus (WNV) is most commonly transmitted to humans by mosquitoes. There are no medications to treat or vaccines to prevent WNV infection. Fortunately, most people infected with WNV will have no symptoms. About 1 in 5 people who are infected will develop a fever with other symptoms. Less than 1% of infected people develop a serious, sometimes fatal, neurologic illness.

Malaria is a mosquito-borne disease caused by a parasite. People with malaria often experience fever, chills, and flu-like illness. Left untreated, they may develop severe complications and die. In 2013 an estimated 198 million cases of malaria occurred worldwide and 500,000 people died, mostly children in the African Region. About 1,500 cases of malaria are diagnosed in the United States each year. The vast majority of cases in the United States are in travelers and immigrants returning from countries where malaria transmission occurs, many from sub-Saharan Africa and South Asia.

With more than one-third of the world’s population living in areas at risk for infection, dengue virus is a leading cause of illness and death in the tropics and subtropics. As many as 400 million people are infected yearly. Dengue is caused by any one of four related viruses transmitted by mosquitoes. There are not yet any vaccines to prevent infection with dengue virus and the most effective protective measures are those that avoid mosquito bites. When infected, early recognition and prompt supportive treatment can substantially lower the risk of medical complications and death.

Chikungunya (pronunciation: \chik-en-gun-ye) virus is transmitted to people by mosquitoes. The most common symptoms of chikungunya virus infection are fever and joint pain. Other symptoms may include headache, muscle pain, joint swelling, or rash. Outbreaks have occurred in countries in Africa, Asia, Europe, and the Indian and Pacific Oceans. In late 2013, chikungunya virus was found for the first time in the Americas on islands in the Caribbean. There is a risk that the virus will be imported to new areas by infected travelers. There is no vaccine to prevent or medicine to treat chikungunya virus infection.

Dirofilariasis in humans is caused by Dirofilaria roundworms. The main natural hosts for the three Dirofilaria species that most frequently cause disease in humans are dogs and wild canids (such as wolves and foxes) and raccoons. Humans are infected with Dirofilaria larvae through mosquito bites. Infection can result in nodules under the skin or conjunctiva and lung granulomas (small nodules formed by an inflammatory reaction) that appear as coin lesions (small, round abnormalities) on x-rays, leading to diagnostic procedures to exclude more serious diseases.

Eastern equine encephalitis virus (EEEV) is transmitted to humans by the bite of an infected mosquito. Eastern equine encephalitis (EEE) is a rare illness in humans, and only a few cases are reported in the United States each year. Most cases occur in the Atlantic and Gulf Coast states (see map). Most persons infected with EEEV have no apparent illness. Severe cases of EEE (involving encephalitis, an inflammation of the brain) begin with the sudden onset of headache, high fever, chills, and vomiting. The illness may then progress into disorientation, seizures, or coma. EEE is one of the most severe mosquito-transmitted diseases in the United States with approximately 33% mortality and significant brain damage in most survivors. There is no specific treatment for EEE; care is based on symptoms.

La Crosse encephalitis virus (LACV) is transmitted to humans by the bite of an infected mosquito. Most cases of LACV disease occur in the upper Midwestern and mid-Atlantic and southeastern states (see map). Many people infected with LACV have no apparent symptoms. Among people who become ill, initial symptoms include fever, headache, nausea, vomiting, and tiredness. Some of those who become ill develop severe neuroinvasive disease (disease that affects the nervous system). Severe LACV disease often involves encephalitis (an inflammation of the brain) and can include seizures, coma, and paralysis. Severe disease occurs most often in children under the age of 16. In rare cases, long-term disability or death can result from La Crosse encephalitis.

Saint Louis encephalitis virus (SLEV) is transmitted to humans by the bite of an infected mosquito. Most cases of SLEV disease have occurred in eastern and central states (see map). Most persons infected with SLEV have no apparent illness. Initial symptoms of those who become ill include fever, headache, nausea, vomiting, and tiredness. Severe neuroinvasive disease (often involving encephalitis, an inflammation of the brain) occurs more commonly in older adults. In rare cases, long-term disability or death can result. There is no specific treatment for SLEV infection; care is based on symptoms.

Yellow fever virus is found in tropical and subtropical areas in South America and Africa. The virus is transmitted to people by the bite of an infected mosquito. Yellow fever is a very rare cause of illness in U.S. travelers. Illness ranges in severity from a self-limited febrile illness to severe liver disease with bleeding.

Yellow fever disease is diagnosed based on symptoms, physical findings, laboratory testing, and travel history, including the possibility of exposure to infected mosquitoes. There is no specific treatment for yellow fever; care is based on symptoms.

We are so confident in our product that we give every customer a, “mosquito free guarantee”. That means that if you have any mosquitoes between treatments we will re-spray at no charge to you!